OBITUARY
The Borlaug I knew
"When people fail to recognise farmers' role in feeding the country, be sure there is something terribly wrong happening", he once told me. Devinder Sharma remembers Dr Norman Borlaug.
23 September 2009 -

It was discovery of the stocky Japanese wheat variety Norin-10, which the US military advisor D C Salmon sent back home in the early 1960s that changed the face of global agriculture. This was the variety, the only known semi-dwarf traditional wheat strain, that Dr Norman Borlaug was keenly looking for. Crossed with the rust-resistant varieties that Borlaug had developed at the International Centre for Wheat and Maize Research (CIMMYT) in Mexico, the world got the miracle improved varieties that made history.

These semi-dwarf plants developed by Dr Borlaug responded to the application of chemical fertilisers and produced a bountiful grain harvest. The yields multiplied under favourable conditions, and Borlaug knew that the best place to apply the new technology was obviously India, with the largest population of hungry and starved in the world. "I tried my best to convince the Indian politicians about the utility of these semi-dwarf varieties in fighting hunger, but they were not interested," he once told me. Although the agricultural scientists, by and large, were convinced about the yield potential of these varieties, the politicians were not.

"When I didn't see much headway being made, I played the political card knowing the political rivalry between India and Pakistan," he went on to explain. "I told India that if you don't want these varieties, I will give them instead to Pakistan." I am not sure whether it was because of the political astuteness of Dr Borlaug or the domestic necessity, India imported 18,000 tonnes of wheat seed of the semi-dwarf varieties in 1966. Within a few weeks of the import, the seed was made available in 5 kg packs and distributed widely in the areas where irrigation was abundant.

The rest is history. India emerged out of 'ship-to-mouth' existence.

For several years after the Green Revolution was launched, I had the pleasure of accompanying him on his annual visits to the Punjab Agricultural University in Ludhiana. As a young journalist I was always in awe of Dr Borlaug, but always found him to be a simple and dedicated scientist. He would spend hours in scorching sun in the wheat research fields and was always keen to visit farmers. At one such evening at a farmer's house, I remember the host saying: "The three major inputs for raising wheat yields are: farmers, improved seed and Borlaug."

Walking along the sprawling wheat fields in Ludhiana, I asked him once:" What is your biggest achievement. I mean what you would like to be remembered for?" I thought he would say that he wanted to be recalled for his contribution to plant sciences and fighting global hunger. But in all humility, Dr Borlaug replied: "I want to be remembered as someone who introduced baseball in Mexico." And when I burst out laughing, Dr Borlaug gave me a detailed account of how he actually spent hours playing and promoting baseball.

Green Revolution subsequently spread to other parts of Asia, and to Latin America, enabling a number of developing countries to emerge out of the hunger trap. Agricultural scientists globally promoted the technology - cultivating the water guzzling high-yielding varieties of wheat (the same technology was subsequently applied in rice) application of chemical fertilisers, and pesticides - and were never able to understand why the environmentalists were opposed to the technology.

Such was the blind faith in the technology that Borlaug developed and promoted that agricultural scientists refused to see the flip side which was clearly evident - the deterioration of the plant ecology and the destruction of the environment. Several years after Rachel Carson published her historic work The Silent Spring I asked Borlaug whether he had read the book: "She is an evil force," he reacted angrily, adding: "These are the people who do not want to eradicate hunger."

I didn't agree with him, and asked him why agricultural scientists can't accept that chemical pesticides simply kill. "You too, Sharma," he quipped, and then replied: "Remember, pesticides are like medicines. They have to be applied carefully and safely." 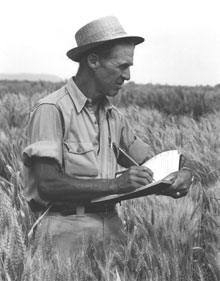 He would often tell me that if India had not followed the Green Revolution technology, the country would have required bringing an additional 58 million hectares under cultivation to produce the same quantity of food that was being produced after the high-yielding varieties of wheat were introduced. (Picture source: worldfoodprize.org)

•  A revolution long turned brown
•  Monocultures of the mind

Dr Borlaug remained steadfast all through on the role of chemical fertiliser and pesticides. He was so adamant that when the Third World Academy in Italy presented a paper on how Brazil had achieved remarkable crop yields in soybean and sugarcane without applying chemical nitrogen, he didn't agree. It was only after he travelled to Brazil and saw for himself the crop yields that he at least acknowledged the reality. But even then, he wouldn't accept agriculture without chemical fertilisers and pesticides. Such was his blind faith in plant breeding that initially he even rejected biotechnology, saying it was a 'waste of time." Later, he backed genetic engineering.

Borlaug never pardoned me for espousing the cause of long-term sustainability in agriculture. He never accepted that the world could produce enough food with Low-external Input Sustainable Agriculture (LEISA) techniques. In fact, knowingly or unknowingly he did espouse the cause of corporate control of agriculture.

Although Green Revolution did bypass small farmers, Borlaug knew and appreciated the role farmers played in producing food. Perhaps the world does not know that it was for the sake of farmers that he had even decried a Nobel prize for Poland's popular leader Lech Walesa. At a time when Lech Walesa had emerged as the leader of the Solidarity Movement in Poland, the Nobel Prize committee constituted a small team to go and find out whether Walesa deserved a prize. The team was headed by Dr Borlaug.

Upon return, he told me that how appalled he was to learn that all that Walesa was talking about was cheaper food for the industrial workers. He was not bothered nor did he care to know as to what would happen to the livelihoods of millions of farmers who were producing food for the industrial workers. "My report had therefore categorically ruled out a Nobel for Walesa." Nonetheless, Walesa did receive a Nobel Peace prize.

"Be warned, Sharma," he told me during one of his visits to Pantnagar University, situated at the foot of the Himalayas in Uttarakhand: "When people stop talking about farmers, when people fail to recognise their role in feeding the country, be sure there is something terribly wrong happening in agriculture." These prophetic words hold true today. In India, it no longer hurts when farmers commit suicide or quit agriculture. For quite some time, farmers have disappeared from the economic radar screen of the country. This is a clear pointer to the terrible agrarian crisis that prevails.

URL for this article
http://indiatogether.org/borlaug-op-ed