HARVESTING ACTION
This bank deposits rain and draws water
A Karnataka Bank branch in Mysore is the setting for a unique tale of investment - in water. The bank's senior manager devised a simple plan to allow accumulated rainwater, which was earlier just pumped out and wasted, to percolate into the earth. Shree Padre reports.
12 June 2008 -

Eight years ago, the Karnataka Bank built a two-storied building at Kuvempu Nagar in Mysore. The ground floor houses the bank's branch, the first floor has its regional office and the second floor has four residential quarters for its officers. Vehicles are parked in the cellar, which is situated 12 feet below the ground level. When it rains, half of the roof water and that of the corridor gushes down into this cellar. If water gets logged here for a long time, it could damage the vehicles.

In order to get rid of this unwanted water, a plan was devised. The cellar was made to slope down to an underground tank having an approximate capacity of 10,000 litres. As and when the tank would get filled, a sensor-operated motor would pump the water out and let it go to the gutters. The arrangement, a literal dialysis, was smoothly operating smoothly till B M Ramesh thought something more could be done. 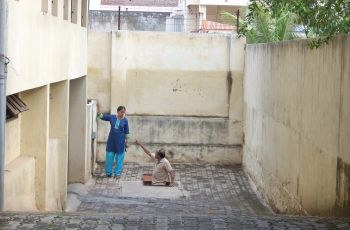 B M Ramesh and wife Meenakshi near the underground tank that stored the 'unwanted water'. Pic: A Krishna Rao.

Ramesh, senior manager of the bank's Chamundipuram branch, resides here. The buildings water source  a borewell  is located just a few feet away from this underground tank. The arrangement to send the rainwater out always raised questions in his mind. Instead of pumping the water out, wouldnt it be better if we could sink it down in our land? he used to ask himself. A disturbed Ramesh finally approached the superior officers with a surprising request. Would they permit him to break the tank open?

For the higher officers, this was a peculiar move by an otherwise responsible officer. They couldn't understand the objective behind the destructive request. Ramesh took them to the location and explained his plan of action in detail. Finally they gave their nod.

The bottom of the tank was broken open for about a square foot area. This was in May last year, just preceding monsoon. A curious Ramesh would come down to the tank everyday, open its lid and check the progress. During summer rains, the tank empties very fast  say in about 12 hours. During monsoon, though the percolation rate is relatively slower, at least 10,000 litres would percolate into the aquifer everyday, he says. An aquifer is a water holding pocket inside the earth. As such, workload for the pump reduced considerably and the percolated water recharged the borewell.

What prompted Ramesh to take such a decision? Previous success. His own house is at Banashankari Third Stage  Vertrabhadra Nagara - in Bangalore. While constructing the house, as it is generally done elsewhere, all the ground area outside the house was fully covered with cement to keep it neat and clean.

There are many buildings with this kind of situation in Mysore where such dialysis is carried out as we did in our bank."

"At least a 1HP motor daily runs about three hours during monsoon and for an hour a day in other seasons when it rains. It would serve the society if they make some simple structures to percolate their respective quantities of rainwater there itself."

Later, on reading newspaper articles, Ramesh realised his fault. The cement cover, he got to know, comes in the way of natural recharging of ground water. There is no exposed soil so that the runoff water can percolate into the sub-soil. Sometime later, when he was working in Chandigarh, he finally decided to break open the cement at one spot in his Bangalore home to dig a rain pit. By this time, the house had been given on rent.

Although his house receives corporation water, in his locality, it is usually mixed with water drawn from local borewells. As such, dependence on a home's own borewell is higher.

Ramesh phoned up a friend in Bangalore and requested him to get this work done. See, experienced professionals have planned and carried out your house construction. Dont invite trouble by taking some crazy, unscientific steps, the friend cautioned. However, when Ramesh returned to Bangalore three years ago, he carried out his plan.

The cement plastering was ripped open in a 3 feet X 2 feet area near the borewell in his compound. A two feet pit was dug. It was filled with layers of big blue metal (pieces of a local granite stone used while tarring the road  locally called jally), smaller blue metal and sand  one above the other. Rain water from the down-pipe (downpipe is what brings the rain water from the terrace/roof down to the pit) was made to flow into that. Ramesh himself bought the PVC pipes and did the fittings to divert the terrace water  such is his passion.

After just one monsoon, I noticed improvement, he recalls. The borewell that invariably used to dry by April never dried up thereafter. 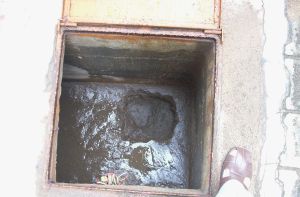 The 'breaking open' turned out to be constructive work. Pic: A Krishna Rao

Rameshs second experiment of cement breaking at his bank also proved beneficial. The borewell water has now turned sweeter and tastier. Earlier, all the steel vessels used for cooking developed thick, whitish scales inside. Cleaners had to scrape these scales three to four times in a year. Now the scaling has come down considerably. Workload for the sensor-fitted motor also has reduced.

Ramesh points out, There are many buildings with this kind of situation in Mysore where such dialysis is carried out as we did in our bank. At least a 1HP motor daily runs about three hours during monsoon and for an hour a day in other seasons when it rains. It would serve the society if they make some simple structures to percolate their respective quantities of rainwater there itself. The present practice of constructing underground tanks for rainwater to be diverted and sending that water away is totally unwarranted.

No doubt, rainwater is wealth like fluid cash. Both simplicity and complexity of rain water harvesting lies in the fact that it has to be site-specific. What one needs is sheer common sense. That's what Ramesh has shown here.

One frequently asked question in the above context is  will the building foundation get damaged if water percolates into the soil so close to it. Not at all, clarifies S Vishwanath, a civil engineer and internationally well-known RWH activist of Rainwater Club, Bangalore. Percolating rainwater in non-expansive soils generally found in our areas doesnt pose any problem. Thats why they put foundation even in fully submerged areas too. It is only expansive soils like clay and black cotton soil found in districts like Bijapur, Gadag, and Bagalkot where we have to keep this possible problem in mind.

The trivial-looking intervention of breaking the underground tank has many important messages for others. Its common to see neighbours fighting about one allowing the run-off into the others compound. Instead of quarrelling with each other, if they join hands to direct that water through rain pits or a percolation well as the requirement is  it would help all the families. The first years rainwater in the compound serves as drinking water for the next year. Catching rain then and there, in addition to raising the ground water table, would diminish urban floods that are often man-made.

One more bonus is that the quality of water improves. The hardness of borewell water reduces as one goes on diluting it with soft rainwater. If the likes of Karnataka Bank take the initiative to demonstrate that we can draw water only if we deposit, that would be a great act of social commitment.

URL for this article
http://indiatogether.org/borewell-environment