SEN-BHAGWATI DEBATE
Irreconcilable differences : The Right-Left Divide in Economics
The recent clash between two eminent economists of our times, Amartya Sen and Jagadish Bhagwati, appears to be centred around the Food Security Bill. Shankar Jaganathan provides a historical context to show why their contradictions extend far beyond any isolated issue to a clash between two schools of the discipline itself.
19 August 2013 -

Many people wonder why two prominent economists - Amartya Sen and Jagadish Bhagwati - cannot agree on a vital economic issue. In engineering or physics this kind of disagreement is rare, especially on fundamental issues. Moreover, one of the two stalwarts involved in this face-off is prepared for a debate while the other appears to be evasive. Which brings up the question, if a debate could be organized between these two, would it add to our understanding or leave us more confused?

Formulating the debating proposition is not a challenge, since the difference between the two economists is very sharp and focused on a point. Bhagwati's School believes economic growth is a prerequisite for poverty elimination, while Sen's School views poverty elimination as a prerequisite for sustaining economic growth. The proposed Food Security Bill currently tabled for discussion in Parliament provides the ideal context to ground this debate and give it real meaning.

Yet I fear this debate may not provide clarity, for an issue that has remained unresolved for two hundred years will not be settled in a few hours or by focusing on merely one isolated act of legislation such as the Food Security Bill. Hence, retracing history could help us identify the irreconcilable.

In the early 1800s, two French economists saw the English Industrial Revolution from different perspectives, triggering a debate. Jean Baptiste Say noticed the scientific benefits which produced unprecedented wealth. On the contrary, enduring poverty right in the middle of this unprecedented wealth caught Simone de Sismondi's attention. Each explored his own perspective, giving birth to two different schools of economics: supply-side economics and demand-side economics, which till date have not been reconciled, not just in India but anywhere else in the world too.

Inspired by the Industrial Revolution, Say wanted to create the science of economics. He began by acknowledging that matter cannot be created or destroyed, but what humans do create is utility. Viewed through the utility lens, services, he proposed, could be considered as wealth at par with products, and called them 'products consumed at the point of their production'. He extended this link between production and consumption to the entire economy in his treatise. Today, this link is taken to be the basis of the statement 'supply creates its own demand,' which is also popularly known in economics as Say's Law. 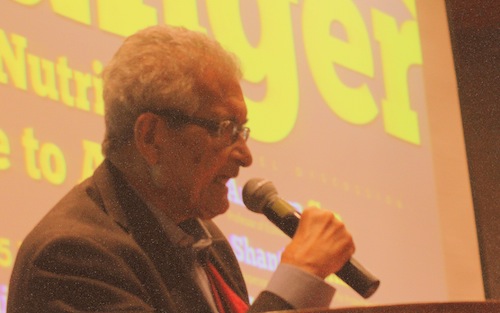 The Food Security Bill provides the ideal context to ground this debate and give it real meaning. Yet this debate may not provide clarity, for an issue that is unresolved for two hundred years will not be settled in a few hours.

Say argued that there can be no surplus production or demand shortage at the level of the economy. While in some industries, demand shortage could occur, this would soon be resolved as producers would move out of this market due to lower profits and concentrate on other industries providing higher profits. He saw self-interest in human beings as the primary driver of all economic activity. Derived from this core idea is his economic policy of free markets, where the government's role is restricted only to providing public order and administering justice.

Identifying self-interest as the driver of all economic activity, Say and his followers went on to formulate the classical economic theory. Low prices prompt customers to buy while high prices incentivize suppliers to produce more, thereby balancing the market. Extending this logic over a short time, they concluded that prices determine demand and supply of goods and services, interest determines savings and investment while wages decide the levels of employment. Based on this, they concluded that economic activity functions best when left on its own, without interference from government or any other regulator and proposed free markets as the solution to all economic problems.

In contrast to Say's rational approach, Sismondi's empirical approach saw the social paradox of poverty thriving with prosperity. At the level of an economy, he saw self-interest and competition combine in the market, resulting in merchants producing the greatest possible quantity at the lowest price. To reduce price, they cut costs including labour costs. Machinery replaced labour and where it could not, they substituted local labour with cheap immigrants. As income levels fall in the economy, there is a glut with supply exceeding demand.

Differing from Say, who saw supply create demand for itself, Sismondi saw income create demand, which in turn created the supply. In the absence of stable or growing income, the shrinking of the economy was seen as inevitable, a phenomena which we call the recession today. Sismondi and his followers held that recession cannot be cured by self-interest-driven action, as the economy is in a vicious cycle. To break it, public spending driven by social concern is essential.

Say and his supply-side economists won the 19th century debate. Sismondi's idea was pushed out of economics, but lived elsewhere in the ideas of socialists like Karl Marx, who was born in the year Sismondi published his book. However Say's victory was not final. The Great Depression of the 1930s threw up a situation to which this school had no answers. The US GDP declined by 27 per cent over a four year period. Low prices did not create demand, low wages did not increase employment and low interest did not stimulate investment. The entire logic of Say's economics began to be questioned.

At this point, John Maynard Keynes resurrected Sismondi's ideas and proposed public income-creation programmes as the tool to revive demand. With the economy responding to such initiatives, Keynes became the new God of Economics. Post World War II, he led the initiative to create a new world order of economics built on collaboration and mutual help, replacing competition and self-interest. The dire state of economies in Europe and Japan hit by wartime destruction acted as the strong fusing glue.

The human mind has a great propensity to simplify. Keynesian economics too was simplified. Based on historical studies, high inflation and low unemployment were found to co-exist, implying that high inflation cured unemployment by generating jobs. Governments too saw this as a feasible plan to act on, as generating budgetary deficit would solve the unemployment problem by creating income in the economy.

For Keynesian economics, the 1970s proved to be what the 1930s were to Say's followers. As high inflation and high unemployment reigned together, Keynesians could not answer this paradox paving the way for supply side economics to return. The 1980s saw the free market movement gain strength, as deregulation and markets returned to the centre stage.

Supply-side economics, now styled as the 'Washington Consensus', prevailed for around three decades until the 2008 Lehman Brothers crisis halted it, reviving the 200-year-old debate. Government support to large banks to the tune of trillions of dollars was necessary to prevent a major global economic breakdown, questioning the validity of the free market theory. Even its most ardent proponent, Alan Greenspan, former chief of the US Federal Reserve, admitted that his ideology of free markets could be wrong, fuelling the debate.

This debate occupied the centre stage in 2012 US presidential elections with Obama espousing Sismondi's ideas and Romney toeing Say. It again looks to dominate the 2014 Indian parliamentary elections as people and parties take positions on the economic front.

Looking back, therefore, we need to ask ourselves if a debate can decide this question, or if we should instead explore where we stand on these three statements listed below to determine our position in this debate:

If we agree, Bhagwati and Say will seem right to us; if in disagreement, Sen and Sismondi will appeal to us. No debate on food security, or for that matter any isolated economic issue such as FDI can end in consensus where differences exist on these very fundamentals beliefs. For answers to these questions lie primarily in conviction or belief, since conclusive evidence proving it to be one way or the other does not exist.

In the course of my study and reflection, I have seen that self-interest, private initiatives and competition are adequate where the problem is faced by individuals. But when the problem gets bigger than each of us individually confronting it, teamwork, public initiatives and collaboration are sought after and cherished. Each one of us can validate this with our personal experiences, by recalling our reactions to national defence and natural calamities in the public sphere and to health breakdown and financial disasters in our personal life.

Shankar Jaganathan is passionate about corporate governance, sustainability practices and economic history. His second book, "The Wisdom of Ants, A Short History of Economics" was published in November 2012.

URL for this article
http://indiatogether.org/amartya-economy