The World Day for Prevention of Child Abuse, observed internationally on 19 November every year, just went by. The Government of India's Protection of Children from Sexual Offences Act (POCSO), to safeguard children from offences of sexual assault, sexual harassment and pornography, also turned a year old on Children's Day, 14 November.

Yet, for the five-year-old child who was forced to perform oral sex on her 40-year-old teacher in a Bhopal Government School, the 15-year-old who was raped repeatedly by her step-father in UP and got pregnant, or the four schoolgirls between 10 and 11 years who were sexually molested by their teacher at a private school in Delhi, all this may not mean anything. The day-to-day trauma of being medically examined, questioned by social workers, made to give statements to the police, activists and lawyers and the psychological distress of their world turning on its head has made them feel unsafe for life.

The country with the most number of children in the world (official estimates put this figure at 400 million plus) has more than its share of dirty secrets. A 2007 Government of India Study on Child Abuse stated that 53.22 per cent children have faced one or more forms of sexual abuse in their life. Do the math! No study has been commissioned since 2007, however, and there are no recent figures which can indicate the extent to which the issue has escalated.

Across India, cases of child sexual abuse (CSA) are often referred to government hospitals. While most referrals are from the police, it is common for families of child victims to take them to government hospitals in the belief that it will aid the process of justice. Many parents are not even aware of POCSO or its provisions. In several villages, law enforcement authorities and hospital staff are unfamiliar with POCSO's mandates as can be seen by how CSA cases are handled by them.

The Protection of Children from Sexual Offences Act, enacted in 2012, protects children "from offences of sexual assault, sexual harassment and pornography and provide for establishment of special courts for trial of such offences and for matters connected therewith or incidental thereto."

However, in a positive development, Bangalore.based Enfold Proactive Health Trust, an NGO which has been working with children and adults since 2002 in the area of prevention of child sexual abuse, sexuality and life skills education, has put into motion a much-needed structure to help minimize the additional trauma that CSA victims undergo when they report abuse.

Raped and sodomized by their father and his friends for several months, two minor siblings, a 10-year-old girl and an 8-year-old boy eventually turned to their maternal grandmother for help. Their mother had recently died. The grandmother approached the local police for help. A few years ago this case and the victims would have ping-ponged from the police to government hospitals, welfare committees, social workers and official departments, all inadequately trained on how to handle CSA.

In this case, the police sent the children for a medical assessment to a Collaborative Child Response Unit (CCRU) at a hospital in Bangalore, where joint and timely action by law enforcement agencies, NGOs, medical staff and government departments ensured that they got immediate care in a child-focused facility based programme, their rights were safeguarded and they did not have to undergo the ordeal of being moved around from one place to another and recounting their abuse repeatedly. The children were examined and a complete evidence report was made, after which they were referred to the Child Welfare Committee for protection, as well as for long term psychotherapy and counseling. The case is ongoing.

Hospital-based Collaborative Child Response Units (CCRUs), a first-of-its-kind initiative, aimed at ensuring child victims get proper treatment, action and medical, social and legal support have been set up through a collaboration between Enfold, the Department of Women and Child Development, Government of Karnataka, and UNICEF.

The first CCRU was inaugurated at Bangalore's Ramaiah Medical College and Hospitals, the second at the Baptist Hospital Bangalore and the third at the Kempegowda Institute of Medical Sciences, also in Bangalore. Enfold says that these centres are focused on linking and training counsellors, medical practitioners, social workers, the judiciary, legal workers, NGOs and the police . primarily for the benefit of the abused child. Training Stakeholders are given key skills in gender empowerment and managing and caring for children who report any form of sexual abuse.

The importance of CCRUs for a country like India, which is still struggling with CSA almost every day, is one that can't be overlooked. "CCRUs provide the framework that is essential to bridge the gap between reporting of cases of sexual assault and effective response by medical, legal and social services. A multidisciplinary team approach can be effective only when there is collaboration between medical staff, police, NGOs, government departments and civil society, specifically the media," says Dr. Shaibya Saldanha, Co-founder of Enfold. 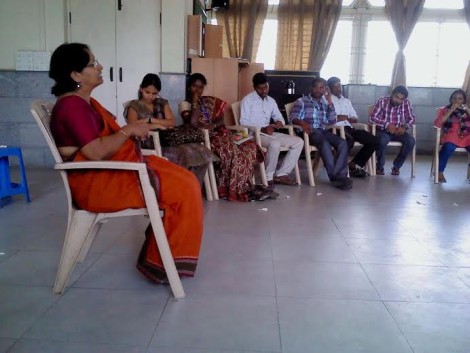 A training session in progress for CCRU staff.
Picture Credit: Vinita A Shetty.

The CCRU project started after Saldanha was trained in 2010 under a UNICEF project in the Philippines, which has a similar model functioning there. She adds that in spite of its early stage and multiple hitches in collaboration and processes, there has been positive feedback so far from victims, NGOs, police and doctors regarding their experiences with the CCRU. "Doctors feel that the training has helped them assess cases better, give comprehensive treatment and write detailed and complete medical reports when such cases come up," says she.

What has in fact been seen and reported through feedback from the stakeholders and families of victims is that these CCRUs also help in streamlining the investigation of child abuse cases to a large extent and look after the greater interests of the abused child. The staff of a CCRU unit is not only trained by Enfold in medical protocol and policies related to CSA cases, they are also instructed in the documentation of the history of cases and how to follow the chain of custody procedures. .Emphasis is laid on how to issue quick, factual, complete and verified medical certificates in a case, the core belief being co-ordination between various stakeholders means faster justice for the child," says Bilquis Gangjee, head Planning & Collaboration, Enfold.

The main focus of any CCRU is the best interests of the child, says Saldanha. Their functions are also multi-pronged - from medical care and counselling of the child to parent and family counselling, from effective interpretation of laws to social interventions and training on how to recognize, respond, document and collect evidence of child abuse. "The outcomes we are looking at through more hospital-based CCRUs across the country are improved care of child and support for the family. But the larger issue is also being targeted. reduced recurrence of abuse, fewer incidences of child abuse, effective and timely punishment for perpetrators and increased reporting of abuse".

Dr Sangeeta Saksena, who co-founded Enfold with Saldanha speaks of why collaborative efforts to respond to cases child abuse can lead the way in India. If everyone is on the same page, then the process works more effectively, she explains. As an example, Saksena talks of a recent case Enfold came across where an 8-year-old girl was sexually abused by her grandfather. The mother had separated from her husband and they went to live with her grandparents for a while. The abuse went on for a while and when the mother finally found out, she took her child and left the house. When she went to the police they said it was a question of respect for the household, and advised her not to sully the family name, asking her to drop the case. The young middle class woman, working as a receptionist, was shocked and did not know what to do next .

"She was told to come the next day, but the police did not file the complaint. Her brother accused her of blackmailing her father. She eventually filed a complaint and the case went to court but the grandfather came in a wheelchair for a hearing. He had got a certificate from a doctor saying he was paralyzed from waist down," informs Saksena. The grandfather died before the case went further and escaped punishment.

A hospital based CCRU would have helped the child and the family in many ways through a multidisciplinary approach. The mother had no single point of contact, from the police to the hospital to court to the child's school and her workplace - she had to manage multiple dialogues on her own. .In all of this, how could it have been possible to focus on the child's psychological rehabilitation and on helping her cope with the trauma?" she now asks.

Cases of child abuse in India rarely get reported and those that do are often hushed up or convictions are abysmally low. According to Saksena, while the current laws relating to CSA are fairly encouraging, they must be enforced thoroughly to herald sweeping changes in the fabric of society. "Before POCSO, the laws used for adult victims were applied to children as well. So if a child had been molested in any way, but there was no peno-vaginal penetration, then nothing could have been done done. This law also makes reporting mandatory. But the backup is lacking, it has to translate into various checks and balances to make the whole system work."

POCSO does have many positives, affirms Saldanha, "It is child-friendly, specifically gender neutral, so it covers both girls and boys who have been abused. However, the need is for effective implementation through training and dissemination programs, given the fact that the people who need to know its provisions most are ignorant of it - the police, judiciary, public prosecutors, child rights organizations and of course, the public at large."

Enfold's long term aim is to have CCRUs all over India and staff trained in CCRU methods, even in districts and villages. While the project has been showcased by the Karnataka Govt to the Ministry of Women and Child in Delhi as an innovative project under the ICPS (Integrated Child Protection Scheme), as in the case of many much-needed initiatives in CSA prevention and child-care, this too is wedged in bureaucratic procedures. Saldanha says, "The Ministry has shown an interest in creating this on an all-India basis but we are not sure where the proposal is held up."

Vinita A Shetty is an independent journalist and documentary producer.

URL for this article
http://indiatogether.org/abuseccru-human-rights