INDEPENDENCE
The absent celebrant
Wherever we are this August 15, we would do well to remember, and take heed of, what a very wise Indian said and did on this day 62 years ago, writes Ramachandra Guha.
16 August 2009 -

It is well known that when India became free on the August 15, 1947, Mahatma Gandhi declined to join the festivities in New Delhi. While his follower, Jawaharlal Nehru, spoke in the Council Hall about India's tryst with destiny, and the crowds danced on the streets outside, Gandhi was in Calcutta, seeking to restore peace between Hindus and Muslims.

His refusal to join his colleagues in New Delhi has been interpreted by some commentators as a sign that he was in mourning. This interpretation is not entirely tenable. While Gandhi was distressed by the religious rioting that accompanied Independence and Partition, he did not gainsay the value and achievement of political freedom. But he remained concerned with what his fellow Indians would make of their hard-won, and somewhat belated, swaraj.

The Collected Works of Mahatma Gandhi has seven entries dated August 15, 1947. The first is a letter written to his Quaker friend, Agatha Harrison, in London. Gandhi says here that "my way of celebrating great events, such as today's, is to thank God for it and, therefore, to pray". Agatha Harrison had apparently asked whether he followed the debates in the British parliament on the Indian Independence bill. Gandhi said he did not get time to read newspapers; in any case, he commented, "What does it matter, who talks in my favour or against me, if I myself am sound at bottom?" 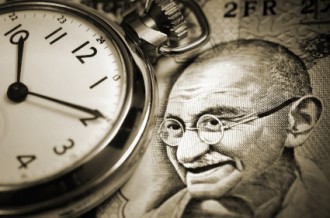 While Gandhi was distressed by the religious rioting that accompanied Independence and Partition, he did not gainsay the value and achievement of political freedom.

•  Swaraj in ideas
•  Nehru: A contested legacy
•  Crowds say something too

Item four describes a visit to Gandhi's temporary home in Beliaghata of the new governor of West Bengal, C Rajagopalachari. When the governor congratulated him on the "miracle he had wrought" (namely, the cessation of violence in the city), Gandhi answered "that he could not be satisfied until Hindus and Muslims felt safe in one another's company and returned to their own homes to live as before. Without that change of heart, there was likelihood of future deterioration in spite of the present enthusiasm".

The fifth entry for the day relates to a visit by some communist activists. Gandhi told them that "political workers, whether Communist or Socialist, must forget today all differences and help to consolidate the freedom which had been attained. Should we allow it to break into pieces?"

Soon after the communists, a group of students came to the Haidari Mansion in Beliaghata to seek Gandhi's advice. The Mahatma told them that "students ought to think and think well. They should do no wrong. It was wrong to molest an Indian citizen merely because he professed a different religion. Students should do everything to build up a new State of India which would be everybody's pride".

The last item in the Collected Works for this day pertains to a speech made at a public meeting at the Rash Bagan Maidan in Beliaghata. As reported in his own journal, Harijan, Gandhi began by congratulating Hindus and Muslims for "meeting together in perfect friendliness". He hoped that this "was not a momentary impulse". From the theme of communal amity he went on to speak of the responsibilities of ordinary citizens. Earlier in the day, when the new Indian governor had taken over from his British predecessor, a crowd had invaded Government House, tramped over the lawn and flower beds, marched into the building and generally made a nuisance of themselves.

Hearing of this, Gandhi said "he would be glad if it meant only a token of people's power. But he would be sick and sorry if the people thought that they could do what they liked with the Government and other property. That would be criminal lawlessness. He hoped, therefore, that they had of their own accord vacated the Governor's palace as readily as they had occupied it. He would warn the people that now that they were free, they would use the freedom with wise restraint..."

In this narration, I have skipped one item, number three, in part because I think it the most important, and hence best dealt with last. This pertained to a visit to the Mahatma by the ministers of the new government of West Bengal. What Gandhi said to them is summarised in the Collected Works. But there is a slightly longer, and somewhat more vivid, account in Manu Gandhi's book The Miracle of Calcutta. This informs us that when the Bengal ministers sought his blessings, Gandhi told them, "Today, you have worn on your heads a crown of thorns. The seat of power is a nasty thing. You have to remain ever wakeful on that seat. You have to be more truthful, more non-violent, more humble and more forbearing. You had been put to test during the British regime. But in a way it was no test at all. But now there will be no end to your being tested. Do not fall a prey to the lure of wealth. May God help you! You are there to serve the villages and the poor."

His words made sense then, and they make sense now. At a time when many - most? - ministers in state and Central governments are consumed by arrogance and self-love, they need to be reminded that, as elected representatives of the people, they should be motivated rather by truth, humility and service. In a deeply divided polity, the political parties must recognize that in times of crisis, they should set aside their differences and work together for social peace. When populist notions of democracy stress exclusively on rights and encourage a cavalier attitude to State property, it is well to be told that citizens also have responsibilities. Finally, in 2009 as in 1947, a special role devolves on students, who, with their lives in front of them, can do more than the middle-aged or elderly in building an India worthy of the nation's founders and of their ideals.

Gandhi's words and warnings have a strikingly contemporary ring. Since they were uttered in Calcutta, those who live in that city, and in the state of which it is part, may read into them a special meaning. In the recent past, West Bengal has been peculiarly prone to political partisanship, State apathy and populist violence. However, these tendencies are manifest, in lesser or greater degree, in other states as well. Wherever we are this August 15, we would do well to remember, and take heed of, what a very wise Indian said and did on this day 62 years ago.

URL for this article
http://indiatogether.org/15aug-op-ed