March 2001: The Environmental movement in India is usually associated with the “chipko” movement, the fight against the silent valley “project” or more recently the Narmada Bachao Andolan (NBA). Little attention is given to the myriad little organizations and movements across the country that have been responsible for the protection of forests and tribal communities all across the country. One such organization that we encountered recently is SAKTI (Search for Action and Knowledge for Tribal Initiative), an organization that has been working to protect the forests and the tribal people in Andhra Pradesh for over 15 years.

Based in Hyderabad, SAKTI operates in the East and West Godavari districts and the Nallamalai hills near Srisailam. Both areas have rich forest lands and are home to several tribal communities like the Koyas, the Kondareddies, the Valmikis and the Chenchus (The East and West Godavari tribals are well known for their uprising against the British Empire in the early 20th century). SAKTI is headed by Dr. Sivaramkrishna, a school teacher turned cultural anthropologist turned social activist. Simple and unassuming and yet very passionate, Dr. Sivamkrishna is very well respected in Andhra Pradesh administrative circles because of his work with SAKTI.

Dr. Sivaramkrishna began his work with the tribals in the East Godavari district while researching on his doctoral thesis. In the process of documenting and interpreting the tribal cultures through their music, dances and folklore, he was exposed to the plight of the tribal people and their exploitation by government officials, bureaucrats and big businesses. He soon founded SAKTI and with the help of his colleagues started mobilizing the tribals to fight for their rights.

One of the first issues addressed by SAKTI was tribal land rights. A notion alien to the tribals, property rights was introduced to the tribals by the British. Early in the 20th century, the British Administration assigned land to individual tribals. But over time, land was stolen from the tribals by conniving non-tribals and corrupt government officials. One of the biggest obstacles the tribals face when fighting for their rights is their lack of understanding of the judicial system and the administrative machinery. To overcome this barrier, SAKTI volunteers not only taught the tribals to read and interpret land records but also trained them to handle legal issues themselves.

Krishnaveni is one of the tribal women trained by SAKTI. She belongs to the Koya clan and is educated only till class V. But armed with skill of reading and interpreting land records, she has confidence to question government officials like the Mandal Revenue officer and the District Collector. She leads the fight by tribals in her village and a few neighboring villages to regain land which was illegally usurped from their forefathers around 1902. Krishnaveni is just one of the many whose lives have been transformed by the efforts of SAKTI volunteers.

In 1984 SAKTI won a public litigation case against the Godavari Plywood factory, an industry that was threatening the livelihood of the tribal people by cutting mango and jackfruit trees in the tribal forests. While Sunderlal Bahuguna and Chandni Prasad Bhat were advocating tree hugging to protect the trees in the north, and while the naxalites in A.P were taking extremist measures to fight for the rights of the poor, SAKTI had adopted an entirely different approach using the democratic machinery and judicial system to fight for tribal rights and the environment.

Since then SAKTI has filed numerous other public litigation cases against development projects that threaten the environment and the survival of the tribal people. Recently, SAKTI won a case against the construction of Bhupatuphalem reservoir in the East Godavari district. The reservoir project, if implemented, would submerge 6 tribal villages and thousands of acres of fertile forest land that provides livelihood for the tribal population. 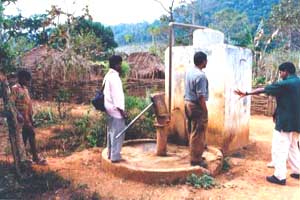 The water purification plant in Maredumilli.

SAKTI has also been involved in various developmental activities in tribal as well as non-tribal areas. In Renchumettu near Rampachodavaram in the East Godavari district, its volunteers have helped the Kondareddy tribe implement a watershed development project. The check dams and irrigation tanks built with the help of SAKTI engineers have vastly increased the productivity of this tribal community. In Maredumilli, another village consisting mainly of people from the Valmiki tribe, SAKTI engineers have built a water purification plant to remove the excess dissolved iron in the ground water.

To help the tribals increase their cash income, SAKTI has provided training to the tribals in income generation activities like making cane and bamboo furniture. SAKTI is also promoting renewable energy technologies in the tribal areas. In Maredumilli, SAKTI engineers installed solar street lamps. SAKTI is now planning to implement a micro-hydel power generation project to provide electricity to the remote tribal villages.

SAKTI got involved with the weaver community in Amalpuram after a devastating cyclone that struck the Andhra Pradesh coast in 1996 washed away their neglected colony. Its volunteers helped the weavers rebuild their lives by providing them with low-cost retrofitted houses, handlooms, spinning yarn and sanitation facilities such as drains and community toilets. SAKTI has trained the weavers in the area of disaster management. Currently, SAKTI is trying to assist the weavers in adapting their skills to the new market requirements and is also actively seeking to market the woven products.

SAKTI has also assisted the scheduled caste villages near Amalapuram. Like the weaver colony, their villages have also been long neglected by the government. In spite of being close to the Godavari river, these people did not have access to clean drinking water. SAKTI helped the villagers build their own water tanks for storing clean and safe drinking water.

Despite all its accomplishments, SAKTI faces many obstacles. With the globalization/liberalization policies adopted by the Indian government, tribal populations face the threat of extinction. The livelihood of the poor and marginalized sections of the Indian society as a whole is threatened by these policies. The judicial system has not been of much help, partly because of corruption and partly because the laws are being manipulated in favor of the rich and the powerful.

As we write this article, some volunteers from SAKTI, Shyam, Chinnarao and Someswara Rao languish in an Indian jail. Shyam is a civil engineer who was responsible for implementing the engineering projects we listed earlier. Chinnarao who belongs to the Valmiki tribe and has completed high school, has been researching the tribal culture, flora and fauna in the Ramapchodavaram area in East Godavari district along with Srinu, a Koya tribal who has a degree in social service and is also the driver and photographer for SAKTI. Somesawara Rao is a Koya from West Godavari who like Krishanveni has been involved in the land rights movement. All three were arrested on baseless allegations in February 2001 when they were visiting the Tenkalagadda village in East Godavari district. Three tribal boys were also arrested in the same context. Krishnaveni, the Koya woman we mentioned earlier in the article, was arrested a few weeks back, again on flimsy grounds.

The future of organizations like SAKTI depends to a large extent on ordinary citizens like us. The social change that these organizations aspire for is not possible without our participation and our support. We could turn a blind eye to the increasing marginalization of the poor, the exploitation of the weak and the destruction of our natural heritage. Or we could join their endeavor to create a just and sane world by actively supporting their cause. The choice is ours.