Relocation of settlements is healing Sariska

Twenty-one families were relocated from the core area of Sariska Tiger Reserve to a newly built township last year. The signs are that this has gone off well both for the people and the forests, reports Malini Shankar.
07 September 2008 -

The signs are that the Sariska Tiger Reserve, where all 22 tigers were slaughtered by poachers in 2004-05, has started healing. The National Tiger Conservation Authority (NTCA) had issued guidelines in July 2006 for relocation of forest dwellers from the core areas of Sarika to advance tiger conservation. In line with these guidelines, forest officials at Sarika had successfully relocated 21 families of the Bagani village (which was in the core area of Sariska) in 2007. More such relocations are underway.

There are two types of plans for relocation of villagers residing in core areas of critical tiger habitats (like Sariska). The first envisages that the district administration offers a lump sum payment of Rs.10,00,000 per adult and the onus of relocation is on the beneficiaries themselves. The second envisages that the forest department husbands the entire relocation procedure. 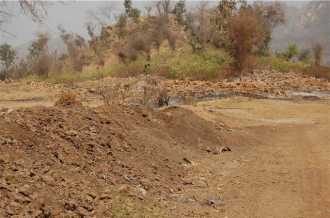 All inhabited structures in the old village of Bagani have been torn down in the attempt to get the wild animals back. Pic: Malini Shankar.

Talking about the new relocation package, P S Somashekar, field director of the Sariska Tiger Reserve, says, The implementation of the relocation is entirely the responsibility of the forest department. Out of Rs. 10,00,000, 35 per cent of the money is for land acquisition and development; 30 per cent for resettlement of rights; 20 per cent for house construction, five per cent for cash incentive; and 10 per cent for community assets and development of infrastructure. Besides, an NGO has been anointed to take care of post relocation transitionary issues. The district administration is also facilitating construction of individual toilets for homes. The relocated families are also getting support in the form of subsidies to undertake dairy development activities as a measure of handholding.

The 21 families comprising about 70 people were relocated from the Bagani village and housed in the newly constructed houses in a newly built township that was created by clear-felling social forestry plantations in Behrod, about six kilometres away. The houses that have been constructed are made of cement concrete and include a big bedroom, a kitchen with potable water supply and power supply. Community toilets have been constructed alongwith a community centre for cultural affairs.

The dwellers have to send their children to the nearest government school in Behrod, and a bank is also located in the nearby town of Behrod. Public transport to the new settlement had not been facilitated when I visited the spot but since the new township has been located on the edge of the Alwar Behrod Highway, the state-operated public transport has come in handy for the community.

According to forester Sushil Yadav of the Alwar Social Forestry Division, It took two years to establish a township and in the four months after the villagers resettled in Nangala Roodh village in Behrod in the Alwar district of Rajasthan they have already raised a crop!

A tigress requires 40-60 kms of territory for successful breeding. Pressure of human habitation is detrimental in sustaining high density of breeding tiger populations. Settlements, therefore, need to be rehabilitated from the core area of a tiger reserve.

•  Relocation of tigers to Sariska proceeds, ami
•  Resettling people to protect the tiger

The relocation of villagers of Bagani has ensured that the inviolate space is made available for tiger sociology. Inviolate space offers prey base (thereby for the tigers and predators) accessibility for pristine water holes, less cattle presence and no people, says Dr Rajesh Gopal, Member Secretary of the NTCA.

What Gopal means by tiger sociology is explained eloquently by Dr V B Mathur, Dean, Wildlife Institute of India. Tiger sociology simply means the range of interactions amongst and between tiger populations. For example, while lions are group living animals, tigers are mostly solitary. Adult male and female come together at the time of mating and then separate. The bringing up of cubs is the responsibility of the female tiger and the male never contributes. Sometimes, the adult male even tries to kill the cubs to gain access to the female. The above are some examples of tiger sociology.

It is essential to have a minimum inviolate area (forming the core of the tiger reserve) capable of supporting 20 breeding tigresses. On an average, a tigress requires 40-60 kms of territory for successful breeding. Pressure of human habitation is detrimental in sustaining high density of breeding tiger populations. Settlements in the core area of a tiger reserve therefore need to be relocated.

The NTCA's guidelines go as follows: The translocations/rehabilitation package should be such that people should readily be willing to relocate. The relocation site should be so chosen so as not to compromise the conservation value of the tiger reserve, i.e., it should be as far away from the core as possible and not located in connecting habitat corridors. Networking with local institutions and NGOs should be established so that post-relocation assistance is provided to the relocated population for some time atleast. Effort should be made to wean the resettled population away from their dependence on forest resources. This would be possible by providing assistance (both technically and financially) in developing alternative livelihood options.

Subsequent to the resettlement of the Bagani villagers, the forest in that region has started regenerating. The dust and debris from the abandoned mine pits enroute to Bagani have started settling down to compact. Regeneration can best be quantified after the monsoons. Nevertheless the attempt at cutting out all human pressure from this hotspot has succeeded at first glance. (That it took the death of 22 precious tigers for the government to wake up to the needs of 70 people is a separate matter.) 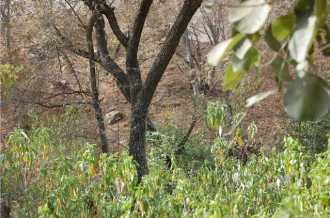 An abandoned mine pit is recovering after nearby Bagani village was abandoned and non-forestry activity ceased. Pic: Malini Shankar.

This is the second successful attempt in India at relocating people living in utter squalor inside desolate Protected Areas, meant for wildlife. The first was the relocation of squatters from Bhadra Tiger Reserve in Karnataka. That apart, villages from Corbett Tiger Reserves buffer zones are also being relocated. If the government had provided forest dwellers this much dignity decades ago, they would not have had to share wind and water with foxes and felines.

According to a village elder in Nangala Roodh in Behrod, If they had given us these kinds of facilities much earlier we would gladly have moved out of the forest. Living inside the forest was fearsome and brought in untold hardships.

Next on the NTCA's agenda is to relocate villagers from Umari village and the three different colonies of Kankwadi village, all in the core area of Sariska. Forest authorities sound confident of accomplishing it during this financial year.

Malini Shankar is a Bangalore-based environmental journalist and photographer.