Anitha Pailoor profiles a large landholding family farm in Karnataka's Hassan district that switched from chemical farming to organic in the mid-nineties.
01 January 2004 -

The farming community, the backbone of our country is never free from difficulties. For years, the food providers have been queuing up in front of the moneylenders house to fill their stomach! What else can be the greatest humiliation to the largest population in the country? While many have surrendered their life to hunger, a few have shaped their life amidst adversities. One among them is A.P.Anantharajaiah (85), a farmer in Holabagere of Belur Taluk near Hassan, Karnataka.

In 1952, Anantharajaiah purchased land swhich was a dense forest and started farming in 1957. He started experimenting different crops from food grains to fruits and vegetables. He was successful in most of his ventures. His association with the agriculture department helped in enhancing the activities. In 1972, due to his old age and ill health, he divided his 97 acres of fertile land and gave the ownership to his 6 sons and two daughters. Now this happy  healthy man has associated himself with his second son Jinachandras family who has successfully followed his father. Anantharajaiahs views on agriculture are thoughtful when he says, Farming has the capacity to either sustain a farmers life or end it. It is up to the farmer to employ it in the right way. Though Anantharajaiahs conviction and hard work have provided a strong base for the Kshetrapala farm, the stable and long lasting bond between the three generations has kept the farm secure and the spirit alive. 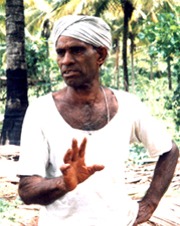 "Planning and hard work are the secrets of our success", says Jinachandra.

When you walk through this 35-acre farm, a world of hard work and commitment starts unveiling. The chemical turned organic farmers (from 1996) are satisfied with the performance of the land that has become rich by consuming natural inputs. The main source of manure for the farm is vermicompost that is being produced in the farm in a quantity of about 50 tones per year.

Jinachandra (60), who is in charge of the vermiculture, has changed the place of production from a well-established shed to an open area in the coconut farm. He found the trial successful and now the shed is used for some other purpose. Jinachandra says that ants havent created any problem to the worms inside. He cuts the naturally available leaves using a manual chopper and puts into the vermi bed. The family brought 1,000 Eugenia earthworms from the agriculture department, which has now multiplied into hundreds of thousands of worms.

When Anantharajaiah purchased the land there were 6 open wells. Till recently they had enough water to feed the coconut trees in the farm. But when they started growing arecanut, water requirement was more. They started digging bore wells. When only 2 bore wells out of 12 ended up having water, the family sought after a sustainable technique. Three years back they constructed trenches all over the farm. With out the percolating structures. Prashanth (Jinachandras son) says, The situation would have been worst last summer when we could not feed the farm with water. Trenches of 3x3 ft size are constructed after every two rows of coconut trees. To make percolation more effective, a 2 ft gap is maintained after 30 ft length. There are 4 water (percolation) ponds in the farm. A bund of 20 ft width, 250 ft length and 8 ft depth at the end of the farm takes in all the water that flows from the hills next to the farm. They have grown Napier grass at the side of the bund, which meets a larger portion of the grass requirement for the cattle at home. One acre of land near the bund has not been irrigated after it was formed. Most of the water conservation structures are well planned while constructing and positioning.

A check dam has been constructed on the other side of the farm with the government initiative. But the structure is not convincing and Jinachandra explains the shortcomings of the dam including improper positioning. He has a better idea in mind. An appropriate example for how governments development programmes remain of no help to the local people. He says, Had the government allotted us half the amount of what it has used for the check dam, we would have built an efficient one. Now the family plans to improve its efficacy by making a few changes.

The farmers are satisfied with the performance of the land that has become rich by consuming natural inputs. The main source of manure for the farm is vermicompost; about 50 tones per year is produced in the farm.  •  Another success: No ordinary farm

Coconut is their major crop. Arecanut and mango are planted as intercrops. There are significant number of other plants like lemon, soap nut tree, banana, cinnamon, silver oak, neem and some fruit trees. They also grow vegetables in a small portion of the farm. The holbagare family has grown arecanut as a monocrop also. They have converted a hill into an areca farm. They have not leveled the farm, they dont even till it. Vermicompost (3 kg per plant) is the only outside manure for the trees. The areca leaves and various weeds that come up in the farm are its manure.

There are 1,000 coconut trees of which 800 are yielding. Fifty to sixty trees are 50 years old. The trees are planted at a distance of 30x30 ft. Due to mite menace, the yield has gone down from 90,000 nuts in 2000 to 70,000 in 2001. They havent applied any advised medicine for the problem. We cant control nature. The mite problem has come from it. Nature itself will control it, says Anantharajaiah about the menace. They put caster cake or neem seed along with vermicompost (15  20 kg per tree) to the coconut trees. Other inputs are its own produces and weeds grown in the area. Instead of pesticides, local herbal produces are mixed and sprayed.

There are 600 mango trees of which some are 38 year old trees. There are both local and hybrid varieties. To name a few: Alphonse, Rasapuri, Sindhura, Baiganpalli, Malgoa, Totapuri and Desari. The distance between the plants is 30x30 ft.

There is a special lemon plant of Australian origin in Kshetrapala farm. One of Anantharajaiahs friends gave an Australian lemon to him long back. He successfully planted it, now the variety has spread all over the farm. This plant starts yielding from the 3rd year of sowing the seed and yields through out the year. He has experimented planting both local and Australian variety at distance of 6 ft. He observes that both the plants yield fruits throughout the year. He doesnt know the reason, but speculates that cross-pollination must be taking place. He has distributed this juicy lemon variety to many farmers who visit the farm. Eventually the variety has become popular and is known as Holabagere lemon among the farming community.

The family doesnt give any portion of the land (particularly mango farm) on lease (giving mango trees on lease is commonly practiced in the region), fearing the practice of chemical farming. Mango is sold at Arasikere and Tipatur markets in Karnataka.

In 1998 Anantharajaiah and family came in contact with Neelakantaiah, another farmer from Arasikere through Parisara Priya Krishikara Sangha (Nature friendly farmers group) in Hassan. Neelakantaiah gave them a success formula for producing copra (value added). Since then they are following that method and are making profit out of it. There are three separate sheds to dry the coconut. The sheds are constructed at a cost of Rs. 1 lakh with the locally available material. The sheds are 10 ft high. One shed is 100 ft long while other two are 40 ft in length. The sheds have enough space for air to pass through it. The wall is not concrete but made using wooden planks. The roof is made of Asbestos sheet.

For one year the nuts will be inside the shed. Once they are taken out, the outer cover will be removed and again dried for a month. Then the dry coconut will be cut and becomes copra. Unlike coconut, copra has good demand in the market and the rate is considerably high. As Ashok Kumar (Jinachandras son) estimates, they get a net profit of about 4 to 5 lakhs from the copra business.

While talking about the present status of the market Anantarajaiah feels that direct marketing is the only solution to the problem. In his opinion, the entire marketing system is in the clutches of the middlemen. Farmer works and the middlemen make the profit, he says.

The entire family has a good understanding and love and liking towards farm life. They feel the pulse of the farm. Mr. Jinachandras sons are educated but never thought of getting out of farm life in search of a job. As they say they didnt know about the counter effects of chemical farming till they came in contact with Hassans Parisara Priya Krishikara Sangha in 1996. Then their vision about life has changed. They attend the meetings that the sangha organises and feel that many doubts can be solved and experiences can be exchanged only through such meetings.

Jinachandra feels that chemical farming kills the farm while organic farming nourishes the soil and the life in it. Several animals and birds live in the farm. There are 25 peacocks in the farm. Holabagere family is a radio listening family. They also read farm magazines for more information.

The family is least dependent on farm labourers. In other words, all the works are shared by the family members. For farm related works they use a tiller and a tractor. Jinachandras sons Ashok Kumar, Kirthi Kumar and Prashanth share the responsibilities and work on par with their father. Obviously, Anatharajaiahs words of experience boost the morale of the family.

These Holabagere people have adopted organic farming in their lives. They have a clear understanding of the concept and concerns of organic farming and are working closer to nature. Farming has become their way of life, not just an occupation.

Anitha Pailoor
01 January 2004
Anitha Pailoor is with Centre for Alternative Agricultural Media. This article comes to India Together from CAAM, through Space Share, our content-sharing program for publishers of other public-interest content. Click here to learn more about Space Share. CAAM is online at www.farmedia.org.
HomeTop
RECENTLY IN INDIA TOGETHER