What happens to the mothers, sisters, daughters, and wives of the Muslim men who are rounded up, rightly or wrongly, for being terrorists? While the media talks mostly to the men the voices of these women are lost. Their family, community and the organizations working on releasing their men are not able to offer them much support. This leads to a silent suffering, the results of which could be dangerous finds Puja Awasthi.

From bewilderment to silence, then from anger to hysteria, the unravelling of Akhtari Bibi’s mind came about bit by bit starting in June 2007 when her husband Jallaludin Mondal was arrested and charged with being a terrorist, whose many acts had included the channelling of funds to the Al Qaeda.

When Jallaludin was picked up in Lucknow, Akhtari was at the couple’s home in Kolkata’s Jaynagar Majilpur locality with their four children, aged between three and 10 years. “For a few days she was silent. Slowly she became completely mad – running away from home on many nights”, says her nephew Jibrial Hassan. For some time the family took Akhtari to a doctor. Then they gave up.

Jallaludin’s small income had come from embroidery work. Following his arrest, the struggle for living was so acute that Akhtari’s anger and hysterics were written away into the background – a stroke of fate that had to be endured, and her days split between the many relatives who were willing to take her in for a few months each.

The couple’s sons came to live and study with Jibrial in Lucknow. The daughters stayed with their grandparents. As Jallaludin’s case wove its way through the courts, his wife met him just once in 2014 in the Lucknow jail. “She was angry with him for not giving her Rs 200 to buy a pair of glasses. She thinks jail is his place of work,” recalls Jibrail.

In August 2015, eight years after his arrest, a special court acquitted Jallaludin of the primary charge of being a Harkat-ul-Jihad al-Islami (HuJI) operative waging war against the country, for lack of evidence. Though he continues to be in jail on the charge of possession of explosives and firearms, his ordeal has inched towards an increasingly familiar and frightful end that has come to define the country’s complex, urgent but often murky war against terror that is claiming its biggest victims in women like Akhtari. 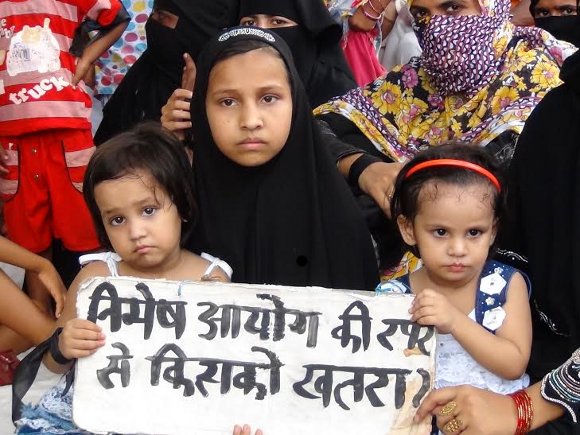 Women’s greater vulnerability in situations of violence and disaster has been adequately documented. As this report from the country’s National Commission for Women explains, “They are the ones who do the daily tasks in everyday life in times of civil strife; they are responsible as mothers of the children, the hurt and the wounded, who are innocent hostages to the conflict not of their creation. They are the wives of injured, disabled or missing men, the soldiers of warring factions and the state”.

For women like Akhtari, the vulnerability is not just burdened by the lack of socio-economic and educational attainment, but also by religious conservatism. It is also weighed down by what the country’s most comprehensive report on the Social, Economic and Educational Status of the Muslim Community in India, 2006 has described as a ‘double burden’.

This refers to Muslims being labelled both ‘anti-national’ and ‘appeased,’ which pushes them to prove on a daily basis that they are not ‘anti-national’ or ‘terrorists’ even as there is no recognition of the fact that the alleged ‘appeasement’ has not resulted in their socio-economic development.

In the larger concern of battling with that perception, the trauma of women like Akhtari is rendered invisible. As is that of Zainab Khatoon, a mother of two, whose husband Bashir Hasan was nabbed by the state’s Anti Terrorism Squad in February 2012 in connection with the September 2008 bomb blasts in Delhi which had left 30 people dead.

Bashir, a madrasa teacher was on his way to get medicines for his son Mohammed Masna when he was nabbed. The hurried bundling of his father into a jeep is a scene that Masna, now six, remembers sharply and enacts endlessly, much to the despair of his mother.

Zainab was five months pregnant when her husband was nabbed. On the day of the arrest, she kept telling herself and the children that he would be back. However by the next afternoon, hope had begun to fade and when the local media descended on her home looking for the ‘terrorist,’ she collapsed in a heap. A few days later her unborn baby died.

In the aftermath of Bashir’s arrest many questions were asked, the most important of which was how could he have gained the trust of Zainab’s family, whom he had met only six months prior to his marriage, after suddenly appearing at their village of Qutubpur in Sitapur, district 85 kilometres from the state capital Lucknow.

“They ask us why we did not dig into his background before the marriage. I do not understand the question. It was my father’s decision. What would an uneducated woman like me know?” despairs Zainab.

Zainab’s day is filled with taking care of her father who has been bed ridden since the arrest. She does all the household chores and rears two goats. Yet her brother Ishaq – who works at Lucknow’s Darul Uloom Nadwatul Ulama (a seat of theological learning), routinely describes her as ‘kam akal’ (of lesser intelligence) and ‘kaam chor’ (shirker). 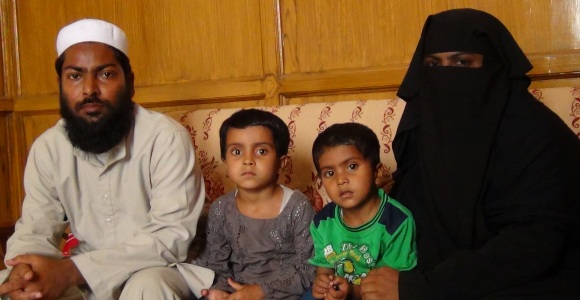 “She doesn’t know how to move forward…keeps repeating the same old story”, he says dismissively.

On her part Zainab does not know what that moving forward will entail. “A woman with two children…my husband branded a terrorist, where do I go? Sometimes I wish the darkness would swallow me up or that I could bang my head against the walls of the jail. Then I think of the children…” her voice trails off.

“What women seek is catharsis, not a solution and this can come from talking to any member of the family,” says Shazia Waqar Siddiqui, a Lucknow-based clinical psychologist who has trained at Ranchi’s reputed Central Institute of Psychiatry. “Women traditionally have a lower value in the family. If they are perceived as not being ‘productive’ their trauma is likely to be dismissed as ‘drama’”, she explains.

In a country where the general acceptance of mental trauma is abysmally low, the social, economic and educational template of Zainab’s life give her little chance of seeking options that would help her find succour and thus contribute to an improved quality of life.

Addressing the plight of women such as Zainab does not figure on the agenda of even those who are most vociferously committed to questioning the state’s war against terrorism. Among them is Rajeev Yadav, spokesperson of the Rihai Manch, a forum for the release of innocent Muslims jailed on terrorism charges.

The forum, a culmination of smaller struggles against the steadily rising mysterious arrests and disappearances in the state, scored a major success in 2012 when the release of jailed innocents found a place in the election agenda of the Samajwadi Party which subsequently formed the government. Though that promise is yet to be acted upon, the forum has kept up the pressure with, among other tactics, a 121-day sit in staged in front of the state legislature.

“Women have been at the forefront of our struggle. We are conscious that their voices are impactful,” says Yadav. Yet, when it comes to giving them a platform for airing more personal agonies, there is hesitation. “Our struggle is against the state. Suppose a woman were to openly express her desire to get a divorce from her jailed husband, it would psychologically weaken our movement, even though we do not deny that this is a woman’s right”, explains Yadav.

While using women’s voices to make political statements is important, limiting them to be the faces of that struggle is an obviously short-sighted and perhaps toxic approach, which reduces their trauma to a single dimension. Letting their many-layered grief and helplessness fester can lead to deep, long term consequences which are different from those harboured by men who have greater avenues to talk about their trauma. For instance, even most field-level media reports on terrorism focus on the voices of men.

Yet, as this study points out “…females are more concerned about the threat of terrorism and they think more about terrorism than men. Their major cause of worry is that the state is not prepared to deal with terrorism. Similarly, there is a significant difference among the attitudes of men and women regarding terrorism. As compared to men, most of the women thought that terrorism is psychological in nature as it is meant to cause psychological suffering. It creates more fear and distress in the public than natural disaster”.

Psychological suffering arises in myriad ways in the absence of any kind of support, as may be witnessed in the unusual situation at the home of Mubarak Hussain in the village of Akbapur. In 2006, Mubarak was picked up from a village in Bareilly (250 kilometres from the state capital of Lucknow) for ‘looking’ Kashmiri and for allegedly instigating people against the Indian government through hate speeches, supposedly delivered by Hussain while making a living by selling garments heaped on his bicycle.

He was jailed for more than two years and faced an 18-month trial before the charges against him were dismissed. Unable to bear the stress, Mubarak’s wife left him, abandoning the couple’s only daughter Shehnaz. Once out of jail, Mubarak’s mother Roshan Ara and his daughter thought that the best way to alleviate his suffering would be to get him re-married.

The extended family and the community offered no help as they were wary of the ‘terrorist’ tag Mubarak carried. Ultimately, a girl from a distant location was chosen, with the lure of a decent bride price. She was 20-year-old Anam, younger than Mubarak by 22 years and closer in age to the 14 year old Shehnaz. 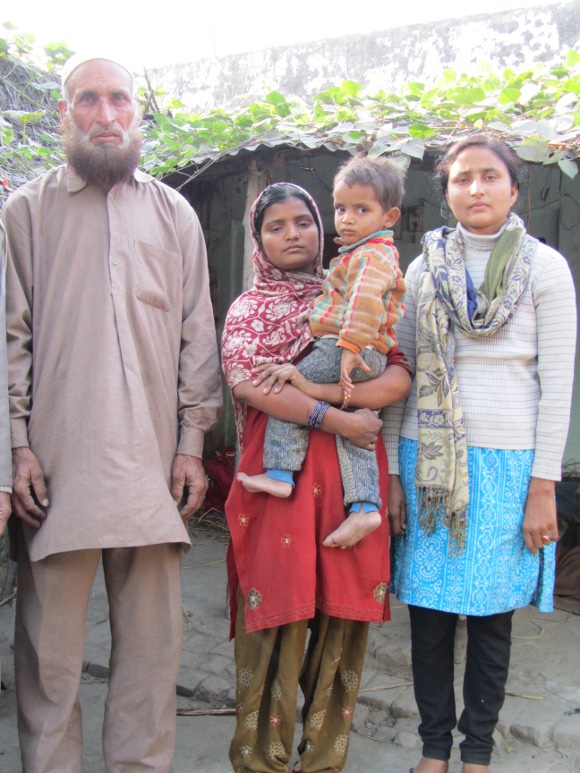 Mubarak Hussain, Anam (in red) and Shehnaz (in blue), victims of a situation they did not create. Pic: Puja Awasthi

An orphan with a son from a previous marriage, Anam has ceased to even try to decipher the logic in that union. “There is a constant and throbbing pain in my head. It is not his fault, but it is not mine either,” she shrugs.

Shehnaz admits that she often wonders if she did the right thing. “Nothing was in our hands. We did not know what to do. I did not know how to make it right,” she says.

Akhtari, Zainab, Anam and Shehnaz are bearing the consequences of a fraught situation that they understand very little of. They are plagued by newer anxieties related to identity, perception and security while battling the older burdens of orthodoxy.

As many studies have pointed out, they are among the poorest, most educationally backward, economically vulnerable and politically marginalised segments of the Indian population. Their trauma is real and growing, yet there is no true engagement with them, largely because there is no clear articulation of their problem even within their own community.

When the corrosive power of their pain is finally acknowledged, it might just be too late.

URL for this article
http://indiatogether.org/when-the-man-in-the-family-is-branded-a-terrorist-women