OP-ED: PREPARING GEN-NEXT
Why ‘skilling’ India must focus on schooling
The thrust on vocational skills and values among the youth has more often looked at solutions based on extraneous skill-development modules. E S Ramamurthy explains why a more skilled future workforce must entail fundamental reforms in schooling.

The Narendra Modi-led government’s prioritisation of skills development as a means of reaping India’s demographic has been stressed time and again, and impossible to miss.

At a meeting of the Consultative Committee of Parliament for the Ministry of Human Resource Development, in November 2014, the clear focus was on integration of skills development in mainstream higher education and developing social values for both skills and vocational sectors. Many of the Prime Minister’s external engagements and statements in the public domain have also displayed an explicit thrust on cooperation aimed at promoting skills development and job creation.

And yet, for the stated emphasis to graduate beyond vision and promise, a number of critical issues must be factored in.

The youngsters who need to be addressed in the context of skill development fall under three distinct categories.

The first concerns those who ostensibly possess some skill by virtue of having gone through an appropriate course, but actually have none to show for such an exposure. They come out of professional colleges and courses without any employable skill, either from the perspective of prospective employers or from the point of view of self-employment.

The reason is evident: the curriculum and more so its implementation focuses entirely on a 'lesson-based' syllabus and lays little emphasis on hands-on training of any sort. The teaching institutions too have little or no infrastructure to impart such training. Organisations that need such skills depend exclusively on 'in-house' training programs to meet their own specific needs and they cannot be expected to contribute to the national pool of trained manpower.

The obvious solution that comes up here and which is most often advocated is to strengthen the syllabus by including components of training in various skills; however the ground realities are such that these well meaning steps intended to bring about a change within the curriculum may go the way of SUPW (Socially Useful Productive Work) and other similar add-ons in schools, which have had little impact.

It may be a lot more effective if the training under NSAT (National Scheme of Apprenticeship Training) is made mandatory for graduate/diploma engineers – as in the case of Medicine, where internship in a hospital is a pre-requisite for practicing medicine – and brought under the control of the intended beneficiaries.

We are stepping into an era in which employment opportunities for unskilled manpower are shrinking. The future of the next generation is hence closely linked to the acquisition of 'employable' skills.

A second problem arises for those who aspire to acquire some skills post schooling but do not see any opportunities or roadmap in front of them. Here, the issue needs to be looked into and addressed from the point of view of the targeted child/student.

The students under this category exit the present system at two points: at the age of 14 or 15 when the statutorily mandated and state-supported schooling ends or at 18 when they complete their full term in high school - successfully or otherwise. These are kids who sincerely want to transition into productive adulthood and look up to the state or education system to provide options and openings; unfortunately, they do not find any.

Of the two, the plight of the children who are forced to get out at 15 is worse. They realise by this time that they are academically deficient and cannot hope to compete with their peers in the existing syllabus. Even when they do not see a future in pursuing further studies, their parents often make this choice for them in the interest of their future.

There is not much of an alternative either, given that the possibility of pursuing a vocational stream is bleak, since the students are most often crowded out of these channels due to lack of space. Whether it is at this point or after 18, there are at least ten aspirants for every slot that the state is in a position to offer.

Given the scenario, we need to come up with vocational training institutions on a large scale, on a crash basis, to absorb this huge influx every year. Planning for linear growth in this sector will just not suffice.

The neglected segment and obstacles faced by them

There is a third set of youngsters who are not even equipped to aspire for any skill and as a result drift towards their traditional family occupations, or settle for less. These passive non-aspirational youth, forming possibly the largest segment, have sadly been ignored so far. Unless this is addressed effectively, any talk of skilling India will be meaningless.

To understand these students, we need to explore the socio-economic factors that contribute to their plight.

We have been and essentially still are a feudal society with strong built-in caste and class-based barriers. Children are exposed to these realities every day of their lives starting at an early age, the effect of which can be seen right through their schooling.

In most instances, they have never had the luxury or the privilege of a choice in their lives; so routine queries such as ‘What would you like to do’ confound them. They are taught to obey commands robotically; even a request appears to them like an order to be followed.

Maintaining silence in the classroom is considered respectful obedience to teachers; the latter on their part encourage this behaviour actively, as it helps them to handle their overcrowded classes. The faculty of questioning, hence, does not come to these kids naturally.

Due to a convoluted thinking process, most of them feel that raising a red flag when they are unable to grasp a concept taught in the classroom may also be taken as an act of indiscipline. For a student to get up and ask a question is, as a result, virtually unthinkable in most schools. A rather revealing comment in this context came from a kid who said that they have only been taught to answer questions, not to ask them! 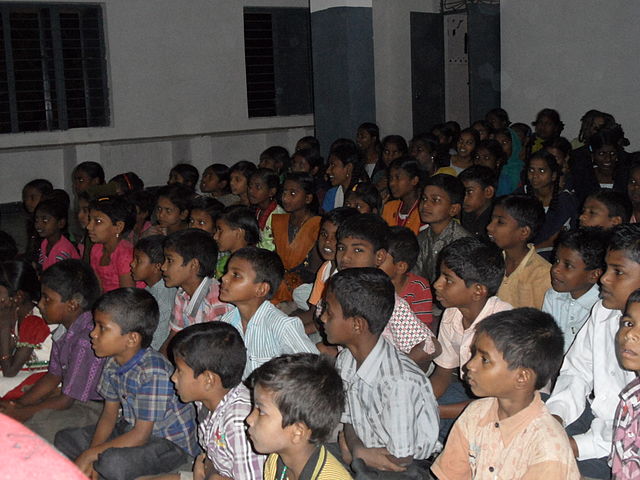 Our schooling system is, therefore, producing kids who have lost the instinctive ability to survive in a competitive environment and/or aspire for something. Typically a child may, under duress, express a desire to become a cab driver but not dream of possessing a cab of his own, much less, start a cab company. Getting them out of this mindset is the real challenge in schools.

This problem was brought out forcefully in the case of Sikshana, a school based programme covering about 6000 students every year across an entire district passing through high school. When an offer was made to engage 1000 of them under a skill-building initiative with guaranteed employment and cash incentives, the highly trained field staff of the organisation – with a reach extending to the last village – could barely bring in 30.

Unless the reasons behind such complex realities are studied and understood, all skill-building initiatives and efforts to tap the manpower in the lower half of the pyramid are bound to fail by a big margin. We need to take a close look at the classroom dynamics in the primary and high schools in order to find a solution for the above.

An interesting phenomenon is observed among the kids as they progress from the age of 6 to 13 through primary schools, which may throw some light on what needs to be done in this context.

It is well known that children are by nature inquisitive and their curiosity knows no limits. This trait is very visible in Grades 1 to 3 where their natural instincts are given sufficient space, further helped by the following factors:

As these children progress from 4th to 7th Grade, however, all the positive characteristics disappear to be replaced by robotic behavior. The single visible factor that does most damage inadvertently is the seating arrangement in the classroom. From a circular one with seating on the floor and a friendly teacher, it now changes to a row of benches/desks facing a stern looking one whose focus is on completion of the syllabus rather than addressing the needs of an individual child.

The seating is also no longer in skill-appropriate 'groups' which enables the teacher to attend to the children better; it is in age-appropriate 'classes' where individual attention is replaced by mass/group contact and standardised modules of teaching.

Anyone who cares to walk into a typical classroom could come across kids who do not know how to divide a simple whole number even after sitting through a full hour of a Mathematics class in which complex equations are taught. It is at this point that the alienation of the children and the collapse of the system commence.

Remedial action for the above needs to address certain larger systemic issues related to the education of children. Precedents for this can be seen from the experience of countries such as Finland who top the PISA chart. Briefly they can be summarised as below:

Unless students are aided to comprehensively acquire the basic skills of Reading, Writing, Expression and Numeracy, attempts to build their skills further for any vocation will keep hitting roadblocks. Scientists, technologists and mathematicians cannot be expected to emerge out of a robotic, non-inquisitive and inexpressive student population of the type that the system is presently throwing up.

It is seen that present initiatives towards addressing these issues mostly reach the kids who have already passed the required skill threshold either on their own or assisted by external resources. These are the ones that are often found to excel in their performance in different contexts. They form the bottom half of the creamy layer in society today. Unless we start focusing on the larger student population below this level, the so-called demographic dividend will perpetually be a promise hovering on the distant horizon.

E S Ramamurthy is the Founder of Sikshana Foundation in Bangalore.

URL for this article
http://indiatogether.org/vocational-skills-development-and-school-students-education