Bijayalaxmi Nanda tracks some of the most prominent debates surrounding two critical legislations, dealing with gender-biased sex selection and abortion respectively, and highlights the commonalities in recommendations made by the apparently contradictory camps.

Since 1991, Census figures have been registering a sharp decline in the child sex ratio in India. At present, it stands at an all-time low of 918 girls for every 1000 boys in the 0-6 age group. This alarming trend, which is being attributed to sex determination followed by gender-biased sex selection, is visible across the country and is a cause of concern for researchers, activists and policy-makers alike.

But indeed, even as sex determination followed by gender-biased sex selection is considered to be on the rise in India, it is important to understand that the recognition of the right to abortion in the context of gender inequality and patriarchy is essential.

The Pre-Conception and Pre-Natal Diagnostic Techniques (Prohibition of Sex Selection) Act, 1994, and the Medical Termination of Pregnancies (MTP) Act, 1971, are the two Acts that regulate sex determination and abortion separately.

While the MTP Act gives a limited medical right to women for abortion in that it legalises the conduct of abortion only under certain stipulated conditions, the PCPNDT Act regulates the provision of pre-conception and pre-natal diagnostic services.

The legislative history of the two legislations differ in the sense that while the former was a result of the government’s obsession to control population, the latter was a product of a sustained campaign by women’s movements and citizen groups.

Debates and Disagreements on PCPNDT Act and MTP

Advocacy groups today are divided on the issue of strict implementation of the PCPNDT Act. Some have a clear apprehension about this impinging on the right to abortion; others consider it important to curb the practice of sex determination leading to gender-biased sex selection.

The group that is wary of the strict implementation of the PCPNDT Act has been critical about the communication material on the issue, pointing out that it lapses into a pro-life discourse thereby compromising on the right to abortion. They have also denounced strategies such as monitoring of pregnancies, which may not be mandated under the Act, but are nonetheless followed by certain state governments. They opine that strict implementation of the PCPNDT Act will, in fact, lead to abortion services going underground, resulting in unsafe conditions for women’s health.

One of the major challenges before the PCPNDT activists is that there is no data on sex selection available in the public domain. Therefore, there is an emphasis on vigilance and inspection to measure the efficacy of the Act. Moreover, they maintain that the MTP Act has not been applied in letter and spirit. They believe that the two laws are distinct from one another.

The PCPNDT Act is directed against pre-birth determination and sex selection and a strict implementation of the clauses of the Act would help eliminate the various existing overlaps with the right to abortion. Many activists especially point to Clause 24 of the Act that states that the woman will be presumed innocent unless proven otherwise, as an example of the gender sensitivity of the law. According to them, focusing on the supply side of unethical and illegal medical practices would counter gender-biased sex selection and with adequate care, would aid the right to safe and legal abortion for women.

Notwithstanding the diverse arguments between different groups, there is an agreement on the basic premise that gender-biased sex selection is anti-women and needs to be curbed.

Currently, there are certain suggestions being made to liberalise abortion laws in India supposedly in the interest of women. For instance, legally extending the option for abortion till the 24th week of pregnancy or permitting non-registered medical practitioners (non-RMPs) to conduct the procedure.

There are 5.7 lakh girls who go missing annually due to gender-biased sex selection, as per data with the United Nations Population Fund (UNFPA/2013). In this scenario, such proposals raise uncomfortable questions. How safe is it for a woman’s health to undergo abortion till the 24th week? Will abortions undertaken by non-RMPs be safe for women? What are the strategies to counter gender-biased sex selection in the light of the huge numbers of missing girls in India? These are just a few significant issues that the PCPNDT group is raising.

But again, irrespective of the separate positions the two groups have taken, there are certain common recommendations they make. What are these recommendations?

For starters, both place emphasis on using correct terminology, which makes it clear that it is not about the right to life of the foetus but about the rights of women. In this context, the term ‘gender-biased sex selection’, emerging from the rights-based framework of the UN agencies, is considered most acceptable. 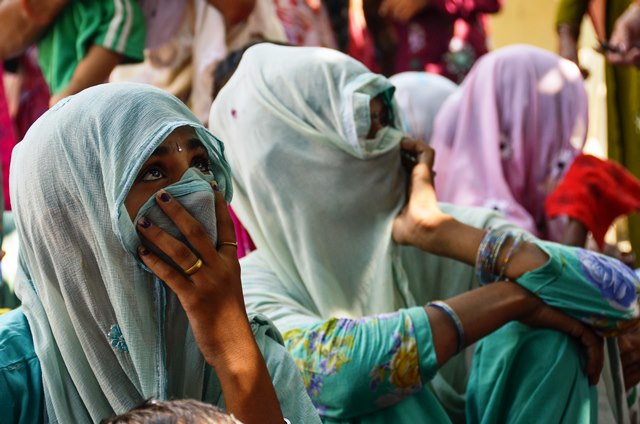 Countering patriarchy by providing education, productive employment, mobility and security can be an effective solution to resolving the issue of daughter aversion in India. Pic courtesy: Breakthrough

Consequently, all communication material around the issue need to be created within the framework of this terminology. There has to be a conscious effort to ensure that such materials do not lapse into a right to life discourse and resist from using words such as ‘sin’, ‘violence’, ‘murder’, ‘genocide’, ‘foeticide’, and so on.

In general, utilitarian arguments about women’s worth as mothers, brides and daughters, too must be avoided. The positive messaging should centre round issues such as constitutional rights, legal scenario, health and reproductive rights. Collaboration with religious and faith-based leaders should be done with caution and on the basis of certain non-negotiables that do not jeopardise perceptions or access to legal abortion or undermine gender concerns.

There is a unanimous agreement on the fact that instead of tracking pregnancies, there have to be systems in place to keep an eye on clinics and diagnostic facilities in a systematic manner. Further, counselling of women and their families has to be an important feature of any maternity clinic in the urban areas as well as in the rural centres. Both the laws must be implemented seriously along with all other gender-friendly laws to make it possible for women and girls to lead a life of equality, dignity and harmony.

Essentially, when dealing with this sensitive issue, what has to be understood is that the implementation of a law cannot be devoid of engaging with the social fabric of the country. At the same time, what also has to be kept in mind is that laws are not necessarily the only way to resolve the issue of daughter aversion in India. Countering patriarchy by providing education, productive employment, mobility and security can be an effective solution. Nevertheless, it is crucial that the laws be seriously implemented to bridge the gap between rhetoric and reality. (© Women's Feature Service)

The author is an academician, feminist activist and researcher. This article has been published in arrangement with the Women's Feature Service.

URL for this article
http://indiatogether.org/pcpndt-mtp-laws-on-abortion-sex-selection-pro-life-or-pro-women-women