The brave new city?
Increasingly, cities around the world are reshaping themselves to be centres of culture and commerce in ways that are more global than related to their home nations. As Indian cities too move in that direction, Darryl D'Monte catches up with a scholar of the evolution of cities, and finds much for Indian planners and city leaders to think about.

I am not quite at home with Prof. Nigel Harris, Professor of Development Planning at University College in London, who has made the study of cities almost a lifetime passion. This is possibly due to envy, compounded by the fact that he is a Briton and a 'foreigner' who is trespassing on home ground. He has authored very many books, but some writings specifically deal with Mumbai. His first foray was titled Economic Development; Cities and Planning: The case of Bombay (Oxford University Press, Bombay, 1978); it dealt with the New Mumbai, which was then in its infancy. He thought - as I recall reviewing the book - that it was all hunky dory for the growth of the country's commercial capital, since a twin city was being planned to divert the spill-over from the existing metropolis.

I next came across his views on Mumbai in his contribution to the book Bombay: Metaphor for Modern India, edited by Sujata Patel & Alice Thorner (OUP, Bombay, 1995). It was titled "Bombay in the Global Economy" and spelt out his views on globalisation. "There is no reason," he wrote, "to believe that poor countries or poor people within poor countries are peculiarly disadvantaged by integration. He believed that "in the medium term, there is no serious alternative to liberalisation and that, if managed effectively, [it] can lead to a radical change in India's domestic economy and a massive expansion in employment."

Nigel Harris was in Mumbai a few days ago and gave a few presentations, one of them to Bombay First, the think-thank set up in 1994 under the aegis of the Bombay Chamber of Commerce. At a subsequent, more informal, meeting, I asked him whether he thought that globalisation was still inevitable and whether he was in favour of all the consequences that flowed from it, so far as Mumbai was concerned. He didn't reply to this question, possibly because he was snowed under with so many disparate queries.

At any rate, he waxed eloquent about how globalisation represented the emergence of a single global economy, which superseded national boundaries. The domestic economic market was being reshaped by the global market. "The economy exceeded national boundaries," he said. "Cities represented a global cluster and network where the economy surpassed the polity; it was beyond the knowledge or authority of national governments." He homed in on the role of cities which in pre-industrial times comprised markets but today are centres of administrative power.

When Britain began to industrialise in the 18th century, it witnessed massive migration from the countryside, which spelled the ruination of the environment. Industrialisation meant urbanisation. Prof. Harris quoted Yorkshire industrialists exulting: "Where there's muck, there's brass (lucre)!" After the second World War, migration began from the former colonies and continued till the 1960s. It was Manchester, incidentally, which was the richest city in the world in the early 19th century, thanks to the woollen and cotton mills. However, the life expectancy of mill workers there was just 28 years, while London was only slightly better off at 32. National governments subsisted on industrial growth.

From the 1970s, the cities of the industrial world began to decline. London began the collapse, as its manufacturing activity shrunk. The massive German coal and steel industries in the Ruhr followed. In the US, the steel cities of Pittsburgh and Gary (Indiana) bit the dust. There was overall panic, and owners were paid to keep the mills open as social welfare (shades of the National Textile Corporation). In the West Midlands of the UK, like in Birmingham, the manufacture of cars ground to a halt.

The process of deurbanisation has been set in motion in real earnest in the West, and some Indian cities - notably Mumbai - show every sign of following suit. London had 8.4 million people at its peak, which fell to 6.5 million at its nadir. Deindustrialisation led to the dereliction of the old industrial cities and the squalor of inner cities. "It was the end of the working class," Prof Harris explained. 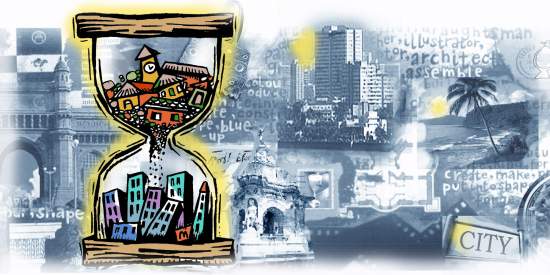 What has filled the gap left by derelict industries, Prof Harris asked. London has reinvented itself as the world's leading financial centre. "This has nothing to do with Britain!" he exclaimed. As many as 600,000 to 800,000 are employed in this sector - mainly in the City of London (district). This square mile, as it's otherwise called, was where London First was born - a corporate initiative to address the urban problems of all of London. Its Indian avatar is Bombay First and Prof Harris was very much its midwife at a conference in this city 11 years ago, and continues to be its well-wisher.

Secondly, as a 1990 study showed, Britain has somewhat unexpectedly become a major exporter of culture: in the shape of music, books, drama (Shakespeare himself is a major industry) and museums. If anything, Paris is a step ahead, since it attracts the most tourists of any city in the world. New York tops London as a leading music generation centre. Thirdly, health is a major export earner: people come to Britain - not just to Harley Street, which is for the rich and famous - but for the nationalised health service, presumably, as well as excellent private care. Indeed, Prof. Harris sounded a note of action: India is emerging as a centre for health services and he warned that the coast south of Mumbai might soon be colonised by ill and ageing Britons and the like who would find it cheaper (and warmer!) to buy old age homes with world class medical care - something they would never be able to afford at home. Java, in Indonesia, is already providing such a facility.

Education is similarly a major export earner for Britain, though the US has long since ousted it on this front. Both countries now have universities which are global in nature and don't make any pretence of addressing solely national issues, as was their wont. It has now become de rigueur for countries like the UK and Australia to canvas for students here. US universities are also casting their net for foreign academics, with the globalisation of education in mind.

For Prof Harris, cities are now emerging as a junction for flows, they have no fixed status. "Smart cities plan such junctions," he observed. "The trick is to provide an interface between air, sea, rail and road." Barcelona has achieved this and stands out as a world city, with not that much economic clout. If anything, Barcelona has reinvented itself as a cultural centre, with the amazing urban architecture of Antonio Gaudi, and staged the global Forum there last year as a focal point of radical and alternative design and progressive ideology. As an excellent example of participatory democracy, as many as 400 NGOs in the city signed a charter with their view of the city's future, which politicians endorsed and thus can't renege from. Indicative of this trend is how each citizen was paid the equivalent of 400 British pounds to paint their house facades before the Olympics.

How much of this brave new world is socially just and participatory, and not controlled by corporate interests, remains open for discussion.  •  Earlier: Imaginary cities
•  Also see: Mumbai's tragedy

"The instant city will have the best labour and encourage migration," Prof Harris continued. One of the strangest contenders is Qatar, which is bidding itself as the highest-tech medical centre in the entire world. He concluded that this was the kind of sub-national entity that was emerging, with the city achieving dominant status. Shanghai has already wrested from its political masters in Beijing 90% of its tax revenues for a limited period for itself, which is how the city boats of the bristling new high-rise financial district of Pudong, across the bund along the river.

How much of this brave new world is socially just and participatory, and not controlled by corporate interests, remains open for discussion. However, one should certainly concede that Harris has given all Mumbaikars, as well as other citizens of other cities which are planning to re-invent themselves - like Bangalore and "Cyberabad" - very much to think about.

URL for this article
http://indiatogether.org/newcity-environment