PRICED OUT BY THE GOVERNMENT
Pioneering school faces new obstacles
This 15-year-old school in Rajasthan has been providing quality education accessible to poor children. But going against the spirit of a High Court order, the Jaipur Development Authority has asked the Bandhyali school to pay a prohibitive sum for its allotted land. Deepa A reports.

The Bandhyali school at Jagatpura, Jaipur, which has been doing a commendable job of making quality education accessible to children from poor economic backgrounds, finds itself under the threat of closure yet again  thanks to the insensitivity of Rajasthan government authorities. Instead of supporting a novel venture that encourages independent thinking and learning, the authorities are showing scant regard to a child's right to a good education.

In the latest in a series of obstacles that government agencies have put in Bandhyali's way, the Jaipur Development Authority has now asked the school to pay a prohibitive sum for the land that it has been allotted a kilometre away from its present site  an amount of Rs.2,760 per square yard (Rs.306 per square foot), which is far more than what the school and the community can afford to pay. This is despite a High Court order noting that the school should be given land at concessional rates. At the same time, the land on which Bandhyali is currently situated is being given to a private university at a far lesser cost of Rs.70 per square yard (Rs.8 per square foot), says Rohit Dhankar, secretary of Digantar, the non-profit organisation that runs Bandhyali and three other schools. "The difference in the prices of land is discriminatory," he says. "Both the plots fall in exactly the same category. Why is the land that is being given to Bandhyali costlier?" It seems particularly galling when one takes into consideration the history of Bandhyali and the way in which it has engaged the community in the otherwise neglected field of education. 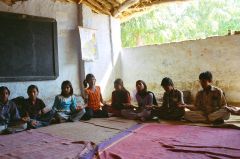 Learning Sanskrit in a circle at Bandhyali Pic: Deepa A.

Consider the facts: started 15 years ago, the Bandhyali school caters to a population mainly comprising Muslims from Kho-Nagoriyan and Bhavgarh Bandhya villages in Jaipur district. The children at the school come from poor families that earn their livelihoods by working as gem polishers or construction workers. Of the 300-odd children in the school, over 200 are girls, in itself an astonishing number in a state that is notorious for discriminating against girls. The figure is also indicative of Bandhyali's success in winning the community's trust and faith. None of this, however, seems to have earned the approval of the Jaipur Development Authority (JDA), which has been trying to oust Bandhyali from the land where it is located for almost a year now.

The school was started in a ground that the community had chosen as its site in 1993. Digantar, which was getting funding from the Central Government's Human Resource Development (HRD) ministry for running the school, wrote to the Collector's office for permission around the same time but did not get any feedback. This was to become a matter of routine: another application was sent in 1995, and while there was no response, the school was given permission to expand to the upper primary level by the HRD ministry. Bandhyali applied to the JDA in 2000, and twice in 2003. In April 2003, the JDA asked Bandhyali to submit a registration amount and certain documents, which was done.

The response from JDA, which finally came in December 2005, was harsh. It gave Bandhyali three days to vacate the premises, as it insisted that Bandhyali had "encroached" on the land. Ignoring Digantar's requests, the JDA decided to allot the land on which the school was standing to a private university called Mahima Shiksha Samiti. Bandhyali's case was taken up by civil rights organisations and it finally landed in court. Ultimately, a compromise was reached in May 2006: Bandhyali would be given land about a kilometre away from where it is currently located; Digantar would make an application for the land, which the JDA was to give the organisation at concessional rates in 15 days; and once the land was allotted, Bandhyali would shift in six weeks.

Instead of two weeks, Digantar finally heard from the JDA over four months later on 10 October. Apart from the high prices, completely at odds with the cheaper rates of land set for the private university, the school has also been asked to pay urban charges of Rs.14 lakh per year for the first three years, and thereafter, Rs 29 lakh per year. This is more than even the annual school budget today, which according to Digantar authorities, comes to around Rs.15 lakh. Dhankar explains that the land where Bandhyali is now situated initially fell under the category of agricultural land. "But after the court hearing (in May 2006), JDA held a meeting and they classified this area as urban residential land and set a reserve price on it," he says. It is based on this reserve price that Bandhyali is being asked to pay the 'urban charges'. Digantar is now considering the options before it, including approaching the court if all else fails.

Activists and educationists in Jaipur mince no words. One allegation is that Jaipur Development Authority is trying to deter Digantar from running the school so that the land it requires will be up for grabs.

•  Cry, my beloved school
•  Not by mainstream schools alone

At the rates currently being charged from Digantar, it would be difficult for the organisation to run Bandhyali. If the school were to shut down, it would have significant ramifications for the community. The nearest primary school, a government-run one, is 1½ km away while the nearest secondary school, also a government-run one, is 6 km ahead. If these become the only options before parents, they wouldn't send their children to school at all, as they feel it is too far away (there is hardly any mode of transport in the area). Besides, the parents are of the opinion that little by way of learning takes place in the government schools. "Children, particularly, girls won't go," says Dhankar.

In any case, while the quality of education provided at many government schools can be questioned, there is no doubt that true learning takes place at Bandhyali. Indeed, the community's faith in Bandhyali came because of the years of hard work that the staff members put in. Abdul Gaffar, academic programme coordinator at Digantar, remembers a time when the staff went to each parent's house to convince them to send their children to Bandhyali. The turn-around occurred after the parents saw that their children could read just about six months after they joined the school.

Part of the reason for Bandhyali's success lies in the unique ways in which learning takes place: there is no corporal punishment, children are encouraged to learn at their own pace with several activities such as theatre and games thrown in, and are motivated to ask questions without fear and to treat teachers as friends. Now, the community stands at the risk of losing all this. "They initially thought they could collect money and pay for the land, but now they are baffled. They don't have a clear-cut plan about what to do but there is a lot of anger," says Dhankar.

Activists and educationists in Jaipur mince no words when they speak about JDA's move. Kavita Srivastava, general secretary of People's Union of Civil Liberties, Rajasthan, says it is clear that the JDA is trying to deter Digantar from running the school so that the land it requires will be up for grabs. Pointing to the contradictions in the stand of government agencies, Srivastava says, "The government claims it is committed towards the education of backward people, and Bandhyali caters to those who fall in that category. If its claims were true, the government would have saved the school." It is clear that the government values land more than an institution that serves the people, and it also shows its lack of commitment to an education that opens up people's minds, she adds.

Educationist Sharada Jain, who is also the director of a Jaipur-based non-government organisation called Sandhan that works in the area of education and development, stresses that Digantar has put together a concept of quality education that reaches people with their participation. Bandhyali itself was set up after several meetings with the community, with a high number of girls being enrolled in the school. "It meets the two essential ingredients that the government wants: getting community involvement and delivering quality education. Having done both, instead of getting support, they now have to defend themselves," says Jain. The move is indicative of the fact that the government is not committed either to the poor or quality education, she adds.

To a volley of such complaints, the JDA offers a pithy response. Krishnawatar Trivedi, deputy commissioner of zone 10, under whom the area under question falls, says that the JDA has indeed given Bandhyali land at a concession. "We are giving them a total of 1.78 hectares [approximately 21,288 square yards], of which we are giving concession in the charges for 3,000 square yards," he says. This figure of 3,000 square yards, for which a concession of 50 percent in the rates has been given, was decided according to the capacity of the school, he adds. He dismisses suggestions that there are differences in the rates for land given to the school and the private university, though both are located just a kilometre away from each other. "It is a government-level decision," he says. The JDA has merely followed the rates that have been already fixed for the land, he claims.

But, as Dhankar points out, even JDA's concession does not amount to much. Not only is the figure of 3,000 square yards too less, even at a 50 percent concession, its costs work out to Rs.1,380, a figure that is far above the Rs.70 that the university is being charged for each square yard.

Deepa A
Deepa A is a New Delhi-based journalist.

URL for this article
http://indiatogether.org/bandhyali-education--2